Film / Castaway on the Moon 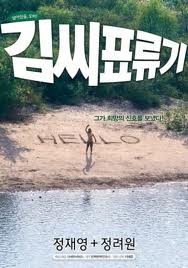 Castaway on the Moon is a 2009 Korean film written and directed by Hae-jun Lee. Kim Seong-Geun is a man with no hope left in the world—he was laid off from his job, his girlfriend dumped him, and he is over $200,000 in debt to a shady loan company. So he decides to kill himself by flinging himself off a bridge into the Han River. However, instead of drowning, he winds up washing up on Bamseom Island in the middle of the river, under a bridge. His cell phone's battery dies before he can call for help, and he can't swim, so he winds up marooned on the island, living a Robinson Crusoe existence right in the middle of Seoul.

Meanwhile, Kim Jung-yeon, a young agoraphobic woman, has not left her room in three years. She communicates with her parents only via texts, and interacts with the world only through South Korean social network service Cyworld. She takes pictures of the moon because no one's there, and she lives for the semi-annual air raid drills in which the streets of Seoul are deserted. One day she looks out her window with the lens of her fancy camera, and sees Seong-gun puttering around his island. She is fascinated by him, and a strange relationship begins to form between them.

The movie is currently available subtitled on Netflix instant.