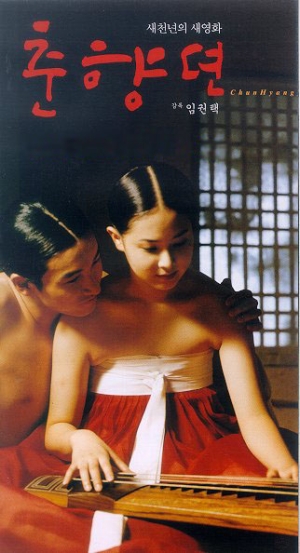 Chunhyang is a movie directed by famous Korean filmmaker Im Kwon-taek (whose following movie was Drunk on Women and Poetry) and released in 2000. It is based on a pansori, a type of traditional Korean performance that involves a storyteller reciting and singing a narrative to the sound of a drum. The movie depicts both the pansori itself being performed, and the story being told.

Mongryong, the son of a newly installed provincial governor, sees the beautiful Chunhyang, the daughter of a former courtesan, and falls in love with her. He arranges to meet her, and to reassure her about the sincerity of his sentiments, agrees to marry her in a secret ceremony. After a period of blissful if clandestine connubial life, Mongryong must leave for Seoul in order to join the ranks of the civil service.

During his absence, a new governor is nominated and claims Chunhyang as a concubine. She refuses, even when jailed and tortured, and is sentenced to be executed. Mongryong, who has in the meantime become a censor in the royal administration, returns in the guise of a beggar, orders the arrest of the governor and sets everything right.