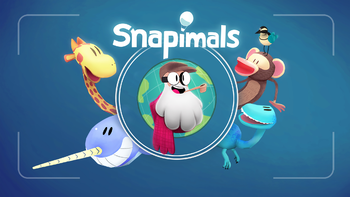 What did you get?
"The LEGENDARY CAPTAIN suddenly reappears after 20 years missing! Seeking MASTER PHOTOGRAPHER. Plans to build the GREATEST MUSEUM ON EARTH!"
Advertisement:

Snapimals is a mobile Simulation Game created by BebopBee Inc. It was released in 2016. The game opens with an article of a fictional newspaper, The Island Gazette, which announces that a famous Captain has reappeared after spending 20 years in the wilderness. He takes you to a remote island, where he proclaims his goal to build a museum of animal photos, and he hires you as his apprentice to help him take the photos!

There are 2 aspects of gameplay: one gives you a top-down view on four islands: The Wilds, the Hub, the Frost world, and the Dino world. You start out on the Wilds, but as you build and upgrade your museum, as well as other things like your ticket booths and docks, you will eventually get to expand your territory to discover new worlds and animals.

The other part of gameplay is the journeying. Here, the player gets a first-person view with their camera as they explore each level and take photos of the animals there. The goal is to get pictures of animals doing certain poses or actions - these are called "Captain's Pics", and they are the photos that the Captain displays in his museum. If you take a photo of an animal that isn't doing a Captain's Pic pose, it will instead be sold as a Postcard Pic, giving you a little extra money. At the end of each journey, there is a section where the player chooses 3 out of the 5 max photos they took for the Captain to grade in a segment called "Picture Scoring with the Captain".