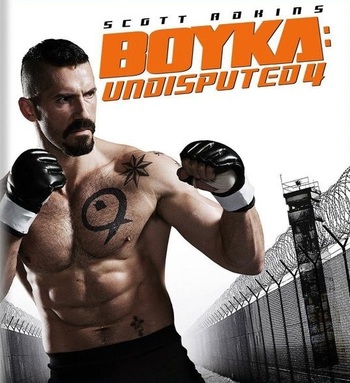 Boyka: Undisputed 4 is the fourth film in the Undisputed franchise, and the third to star Scott Adkins as Yuri Boyka, who began as the antagonist in the second film and became the protagonist in the third one, where he earned his freedom after winning the Prison Spetz Competition. After escaping to Budapest, he begins a new life fighting in underground clubs to make a name for himself. His efforts attract the attention of professional fighting scouts, as well as earning him a fight for the European MMA championship.

After he wins, he learns that his opponent has died from the beating and is overcome with regret and concern for the man's family. He then risks his freedom by returning to Russia to seek out the man's wife (Alma) to make amends, learning her husband had taken out a loan with a crime boss named Zourab. Since he died before it had been paid back, Zourab now claims Alma as recompense against her will. Boyka offers to fight for Zourab to wipe Alma's debts clean and redeem his soul.