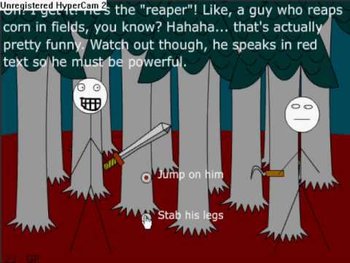 Billy's Big Adventure is a series of three video games created by Drunken Orc for Kongregate and Newgrounds in 2008, each of them playing like a Gamebook. All games have a specific element to them, though: 1 has you as a standalone character, 2 has you playing as the titular character, and in 3 you play as him again, but the game is more RPG-like.