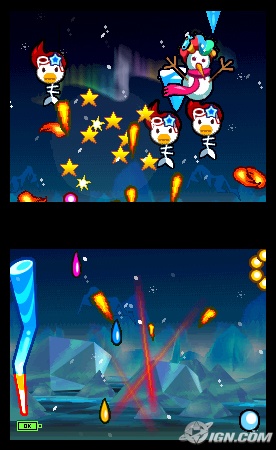 Don't ask.
Big Bang Mini is a Nintendo DS shoot-em-up designed by French developer Arkedo Studio, who also worked on the Breakout clone Nervous Brickdown. The game is mostly stylus-based, and your objective is to defeat enemies on the top screen by flicking your stylus upward to create fireworks. The hard part is not only the fact that you have to also use the stylus to physically move your ship around projectiles, but if your own projectiles don't hit an enemy, they explode in a shower of other projectiles, resulting in even more for you to dodge. This game isn't particularly easy. Or sane, either.
Advertisement:

The game received much praise, even being featured in IGN's 2009 Awards.

This game uses of the following tropes: