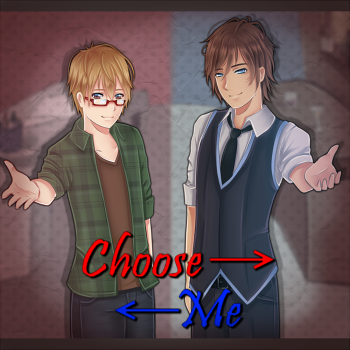 Who will you choose?
Advertisement:

Choose Me is an OEL otome Audio Drama.

Each CD will have a different story in which you listen through the tracks and, near the end, pick between the two love interests by selecting their specific audio track when the time comes.

As of the writing of this article, only the Mark or Doug

story is available, though it includes a promo recording for the next story, Carlos or Ryan.

The stories and general dialogue (bar any Ad Lib) are written by Michaela Laws, the writer of Our Honeymoon and one of the series creators of the OEL Visual Novel, Seduce Me, and they all three share some of the same voice talent.

No connection to the 1984 film Choose Me.

The Choose Me series provides examples of the following tropes:

Mark or Doug
Doug: It appears both of us are at an impasse. Both of us are interested in you, but you have to decide which to be with, at least for tonight.

Choose Me: Mark or Doug is about a secretary (you) at an architectural firm. Your coworker and childhood friend, Mark, tells you about a new fancy bar called Euphoria that opened up and you decide to check it out. While visiting the bar, you meet an intriguing bartender named Doug that also happens to be the owner and manager. While chatting with Doug, Mark shows up to check out the bar as well. Things get tense between Mark and Doug, both of them wanting your attention, so it comes down to you choosing whether to spend time with Mark or Doug.

The CD is 11 tracks long in all, though only the first 8 are the story. Tracks 1-6 are played straight through for the set-up and characterization and next are the two tracks you select from (track 7 for Mark and track 8 for Doug). The last three tracks are interviews with the voice actors and a promo for the next Choose Me scenario (Carlos or Ryan).

Carlos or Ryan (Promo)
You gonna be okay this trip? You're going to be stuck in a car with the duo from hell!