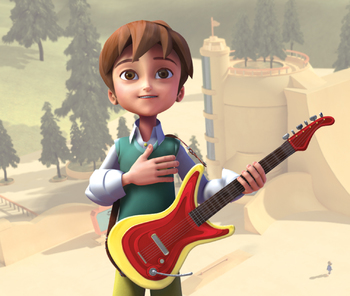 The series' main character, Chris is an avid skateboarder and guitarist who loves video-games and pizza.
Joy Pepper 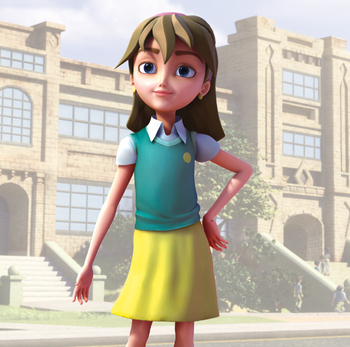 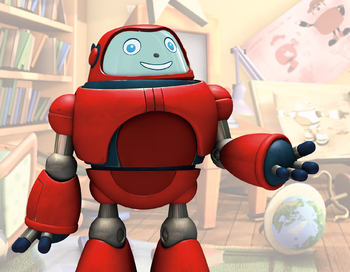 A robot built by Professor Quantum to protect and assist Chris and Joy, Gizmo provides much-needed exposition during their time-travel adventures.
Superbook 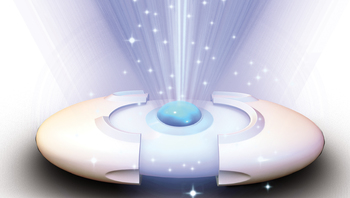 The titular Superbook, here taking the form of a small computer tablet instead of an actual book like its earlier-series predecessor. It draws the kids into time-travel Bible adventures to teach them important lessons. 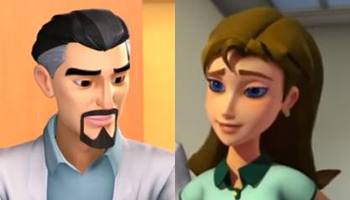 Chris's parents, who love their son very much and do their best to raise him right. Crispin, frequently identified by non-relatives as Professor Quantum, is a famous scientist and Gizmo's inventor, while Phoebe is a homemaker.
Todd 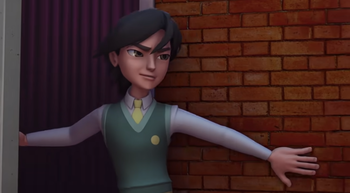 A schoolmate of Chris and Joy at Valleyview Middle School, Todd antagonizes Chris at every opportunity.
Jason Dunning 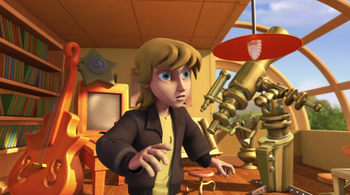 A young thief who first meets Chris, Joy and Gizmo while trying to rob the Quantums' house.
Mr. and Mrs. Pepper

Joy's parents and the operators of their family business, Pepper's Pizza Palace, where Chris, Joy and their friends occasionally hang out. 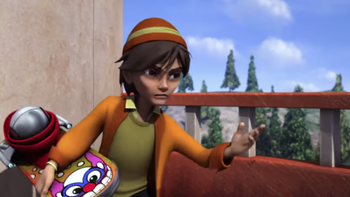 The leader of a delinquent gang of extreme skateboarders known as the Skateboard Maniacs.
Barbara 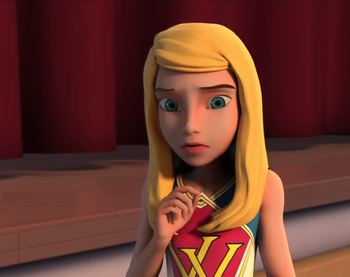 A cheerleader at Valleyview Middle School who antagonizes Joy and, later on, Jia Wei.
Jia Wei 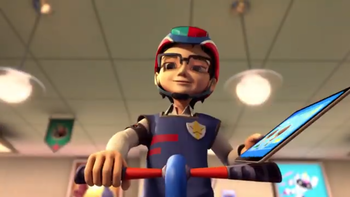 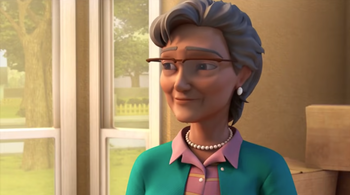 Chris's grandmother on his mother's side, a woman of great faith who has been recently widowed after the death of her husband (Chris's grandfather).
Ellie 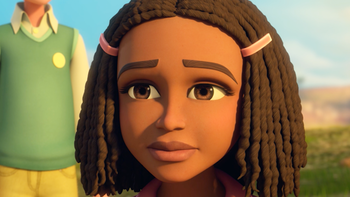 Chris's classmate who shares Math period with him, Ellie has been contemplating several questions about the Bible prior to her on-screen debut in Season Five.
Pastor Aaron 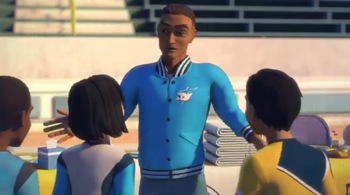 The pastor in charge of the youth group that Chris and Joy attend at church.
Commander Duke Conrad 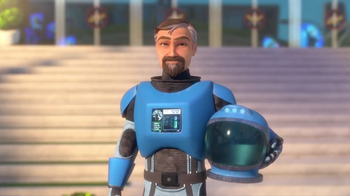 A famous astronaut and deep-space explorer who spearheads the space-themed camp that Chris, Joy and Gizmo attend in the two-part episode "Paul and the Unknown God."

The Father of Jesus, creator of the world and everything in it, and the series' Big Good, just like in the Bible. While this page

has several character-tropes about Him that also come into play throughout the series, the list below will focus on tropes specific to this show.
Jesus 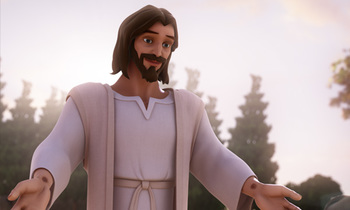 The Son of God, Rabbi of the Apostles, and prophesied Savior of the world, as in the original text of the Bible; many New Testament stories as depicted in the series revolve around Him, though He also makes a few cameos in Old Testament stories. Most of the character tropes listed here

apply to this version of Jesus as well; this list focuses primarily on tropes specific to this show.
Michael 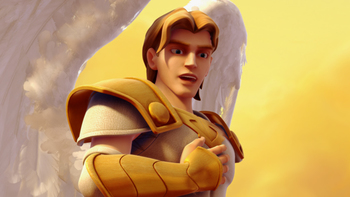 The captain of Heaven's warrior-angels, and the very first Biblical character the kids meet in the show's first episode, Michael makes several appearances (mostly cameos) across the series thereafter.
Satan/Lucifer 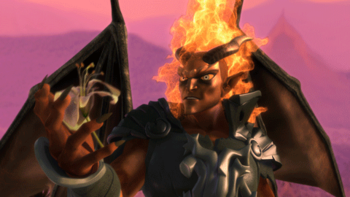 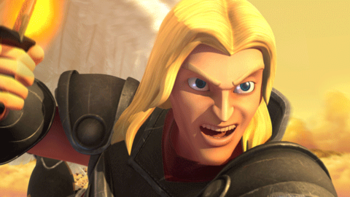 A former angel of Heaven known as Lucifer, the being who would become known as Satan led a revolt against God and was banished for his trouble; he now roams the earth while opposing God and all He stands for. Several tropes listed here

apply to him; this list focuses on tropes specific to this series.
Moses 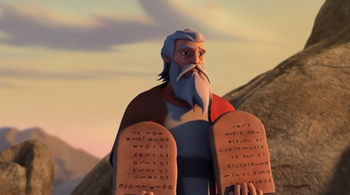 God's chosen leader to take the captive Israelites out of Egyptian bondage and to the Promised Land of Canaan, and the one who collects the tables of stone with the Ten Commandments on them along the way.
David 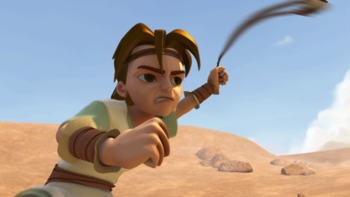 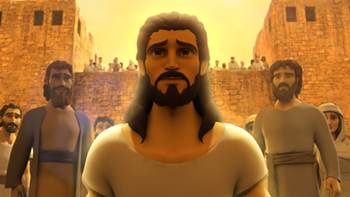 A shepherd boy who later becomes one of Israel's greatest kings, and the future father of the wise King Solomon.
Elijah 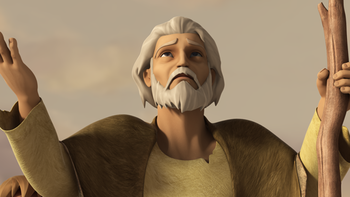 A fearless prophet of God and rebuker of sin.
Mary 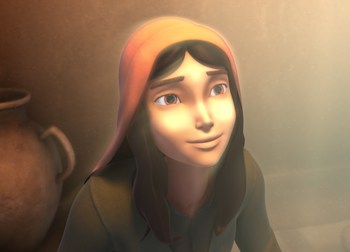 The human mother of Jesus, who gave birth to Him through the power of God's Holy Spirit despite being a virgin at the time. She appears in the series at various points in Jesus's life, during which the kids meet her either as a young mother or as an older woman during Jesus's adult years.
Simon Peter 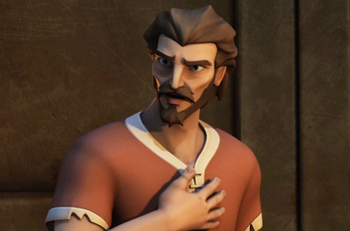 The most prominently featured of Jesus's original 12 disciples, and the one who gets the most focus during the early days of the apostles after Jesus's death and resurrection.
The Disciples of Jesus 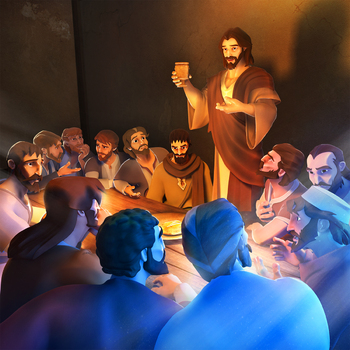 Click to see the disciple John as an older man 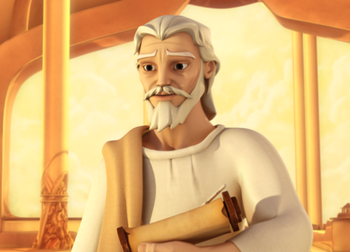 The original twelve disciples of Jesus, and the ones who follow Him most closely during His years of ministry. Peter gets the most focus out of the twelve (as noted in his folder above), along with John and Judas Iscariot.
Paul the Apostle 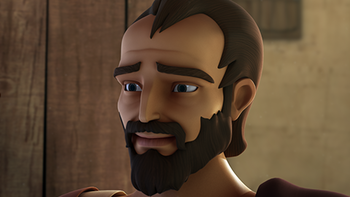 The apostle of the gospel of Jesus to the Gentile world, personally called by Jesus to do that missionary work. Formerly known as Saul of Tarsus, the persecutor of Christians.