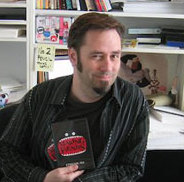 Pictured- Dave Wasson, while helping an elderly nun across the street, was overheard saying, "If you can make just one orphan smile then it's all been worth it!"
Advertisement:

Dave Wasson is an American animator whose projects include Time Squad and is one of the directors for the 2013 Mickey Mouse shorts.

Born and raised in Arkansas, Dave went to study character animation at the California Institute of the Arts (CalArts). Upon graduating some of his first jobs included animation, layout work, and character designs for Cool World and Space Jam.

In 1997 Dave jumped on board Fred Seibert's Oh Yeah! Cartoons program for Nickelodeon. One particular project included a series of shorts entitled "Tales from the Goose Lady", about an insane magical goose and her talking wand "Juanito" who stalk two children and force them to listen to their versions of classic fairy tales. Think of it as a twisted version of Jay Ward 's own Fractured Fairy Tales. Another of project called "Max and His Special Problem", about a man who accidentally sneezes out his brain, won Dave an Emmy for Production Design in 1999. These projects had him working with other animators that would go on to work with Dave many times again over the years including Rob Renzetti, Alex Kirwan, Carlos Ramos, Larry Leichtliter and Tim Biskup.

After Oh Yeah! Cartoons, Dave went on to create his own show for The Cartoon Network, Time Squad (2001-2003). Though short-lived, Time Squad has developed a cult following in the near-20 years since it first hit the airwaves. Dave soon went onto various animation jobs over the early 2000's including direction and character designs for My Life as a Teenage Robot, Clone High, The Buzz on Maggie and Making Fiends.

In the current decade, Dave has had a hand in producing, writing, and directing some of Disney's latest projects for television including Star vs. the Forces of Evil and several of the new Mickey Mouse cartoons. He also has ventured into writing and illustrating children's books, his first being The Big Ideas of Buster Bickles.

Tropes that apply to Dave Wasson: