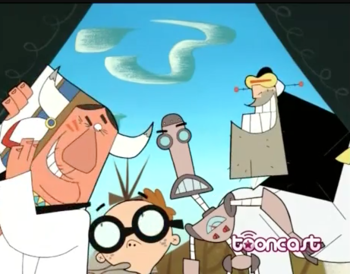 On the satellite, Tuddrussel and Otto have been playing countless games of Tic-Tac-Toe while Larry has been ordering supplies via holograms from his arm-computer. The alarm goes off suddenly, and the team sees that it has to help Sitting Bull and leaves.

The team arrives in the Valley of Little Big Horn, where the members find Sitting Bull admiring his new suit. Tuddrussel introduces the team, telling Sitting Bull to meet with General Custer, but Sitting Bull refuses, saying he only wants to enjoy himself by partying. He shows Time Squad all of the changes he has made for himself to be happier, ignoring Larry’s comments of having a mid-life crisis. Otto insists that Sitting Bull should be helping his nation, and wonders what could have happened to him. Sitting Bull explains that he had a vision one day from his ancestor, which told him to be ready to face a great challenge. He responded by “connecting with his inner self” and enjoying his life more. Otto suggests that Sitting Bull interpreted the vision incorrectly, but Sitting Bull denies it and changes the subject by inviting the team to a friend’s rave later on.

At the party, Larry angrily points out that Sitting Bull is hanging out with people who are half his age, but Sitting Bull says that “age is a state of mind” and attempts to flirt with the young women who already have dates to no success. Otto suggests that the team try to intimidate Sitting Bull with how youthful they are by partying as well, but Sitting Bull doesn’t even notice and out-parties them into the night, exhausting the guy's strength and patience.

The next morning, the team is completely wiped out, while Sitting Bull is still partying on. Otto suddenly hears the bugle call for the 7th cavalry heading for Little Big Horn, but Larry has given up on the mission and continues shopping. Otto suddenly has an idea and tells Larry to follow him.

Sitting Bull is dancing alone when he suddenly sees Larry’s duster hologram, accompanied by Larry’s voice. The ruse works, and Sitting Bull cowers before its presence. Larry, impersonating Sitting Bull’s “great uncle Morty,” tells Sitting Bull that he is very unhappy with his dishonorable behavior. He says that he never wanted Sitting Bull to live like this, and Otto takes over to explain what his vision that he mentioned before meant that Sitting Bull is supposed to face General Custer in battle. Sitting Bull is unhappy, but obeys, and the team watches the battle before leaving.