The Character sheet for Time Squad.

open/close all folders
The Time Squad 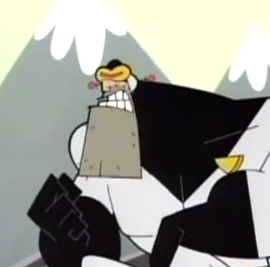 A time cop, who possesses all the physical requirements for his job and none of the intellectual ones. Whenever there's someone who needs beating up (and even when they don't), he's the best person for the task. Impulsiveness, aggressiveness and air-headedness are traits which define Tuddrussel quite nicely. Not much of his backstory is known, aside from his Southern heritage and a short-lived marriage to fellow time cop Sheila Sternwell. He and Larry have a typical Vitriolic Best Buds relationship (which can legitimately be read and proven as Belligerent Sexual Tension by some viewers), and he is much like an irresponsible father to Otto. 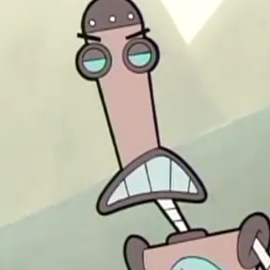 The resident Robot Buddy and the only one on board able to operate the computer. It's his job to make sure the squad ends up at the right time and place. Initially, he was programmed as a polyglot robot for diplomatic purposes; when all of the nations rejoiced into one, huge country, his consular abilities were no longer needed. Larry is famous for his effeminate behaviour and interests, which are portrayed all but subtly. Unusually, he is extremely dramatic and open in showing his emotions whilst still being the snarkiest of the trio. He prides himself in having knowledge of proper etiquette and manners. The relationship he shares with Buck Tuddrussel provides what could be some of the most blatant examples of Ho Yay in Western Animation that's not intended for general adult audiences in the days before Adventure Time and Steven Universe made it more mainstream. For Otto, he has been repeatedly depicted as a maternal figure. 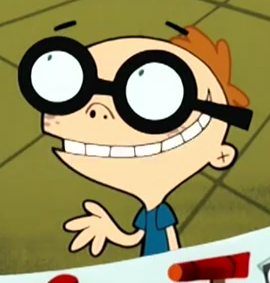 An orphan illegally traveling along with Tuddrussel and Larry, taken on board due to their incompetence and his impressive historical knowledge (and for Otto to escape his brutal life at the orphanage). Despite being a bookworm, his demeanor is far from boring; he is just as childlike and jocular as any regular 8-year-old. Even though he is the youngest, he is also the most competent and responsible out of the squad, being the only one pure enough to not let himself get swayed by temptations. Depending on who he's siding with, he can either become loud, obnoxious and destructive (when Tuddrussel has him company) or composed and calm (when it's Larry he agrees with). 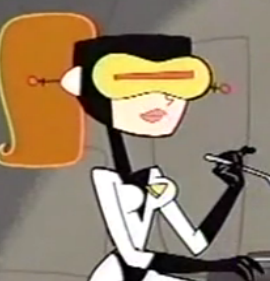 A lieutenant within Time Squad ranks, Sheila Sternwell is a no-nonsense woman that takes her job seriously. The ex-wife of Buck Tuddrussel, it's made clear that while she regrets making the mistake of marrying in the first place, and can be slightly bitter towards him, she doesn't actually resent him and still does her job and helps out Tuddrussel and his unit when needed. She even seems to go far in not ratting out Tuddrussel and Larry over Otto, and other screw ups that she should be reporting.

A advanced robot that is more qualified for the job of a time cop than Larry, and he loves to rub it in. Working with Officer Sternwell, he provides actual help and guidance on missions.

Professional and competent, he's the best of the best of what Time Squad has to offer; but he's also a arrogant jerk that gladly makes trouble for Tuddrussel and Larry.

The best officer in Time Squad needs to have the robot with the most advanced technology right? Lance is the perfect partner for J.T.

Otto's former caretaker before getting taken by Larry and Tuddrussel. Otto had good reason to fear her, as did the other kids that she kept. Obviously not afraid of the police or anyone coming after her, Sister Thornley freely abuses the kids that are put into her care, while at the home and even more disturbingly in public. Her motives are despairingly questionable, such making the children work under horrific conditions in order to make a quick buck. Or why she had a problem with Otto reading books. (Or any child reading, for that matter. She apparently had an entire policy against it.) Quick to punish, she makes it clear that one does not want to cross her path.

The Austrian doctor who is often credited as the father of modern psychology. The Time Squad was sent to stop the psychologist from hypnotizing his patients into thinking that they are wild animals as a means of controlling their mental issues.

As the first president of the United States, Washington is portrayed with a rare sympathy that other historical figures do not enjoy. He's a man of integrity and with a deep love for his country, and of complete sound of mind and body. Also to boot, he's shown to be an overworked leader that wants more than anything to spend time with his family and is in a constant state of worry thanks to hippies and rabid fans.

AKA Edward Teach, the Time Squad has a rough time trying to get the pirate from saving the planet to stealing goods.

The famous Egyptian queen is busy destroying the Great Pyramids of Giza and making way for a mall that only royals can afford to go to.

The Time Squad discovers that the great city of Rome was thrown into shambles thanks to Caesar's poor handling of his role as leader.

Voiced by: Carlos Ramos
The French leader is a strange little man who clearly wants to do what History dictates for him to do. But unfortunately, for Napoleon and the Time Squad, the only thing standing in the way of war and conquest for France is the Emperor's wife, Josephine.

Instead of finding a depressed alcoholic writer of horror, we get a children's book author that refuses to let the dark and cruel side of life get him down.

Time Squad must convince the radical hippie leader to give back Washington's troops before the British army attack and to make America's first flag.

The first female pilot is too paranoid about germs to even consider the thought of going outside, let alone flying a plane when the Time Squad comes along.

Carver, the brilliant inventor for more than a hundred uses for the peanut doesn't need Time Squad's help in figuring out what to do with his findings. What he needs is help against his evil little brother Todd Washington Carver.

Known as the inventor of the cotton gin, Whitney somehow manages to instead make a horde of flesh eating robots that manage to destroy everything in their wake.

Half of the famed exploring duo, Lewis and Clark. A competent, organized explorer, his ways clash with those of a sloppy, ill-tempered Clark, leading to a tragic break-up between the two.

The other half of the famed exploring duo. Unprepared and sloppy, he gets fed up with Lewis and breaks up with him. Alone, he is clueless, and he must learn the hard way that he truly needs his partner to get his job done properly.

Greek warrior known for fooling the Trojans into accepting the fabled horse into their city walls. Instead, he just wants to shower the Trojan King with goodies for his birthday and make gift-giving the Greeks' legacy.

The Prince of Thieves is stealing from the poor and giving to the rich- contrary to popular legend- in order to impress the snobby Prince John.

American brothers credited with building and flying the first successful airplane in 1903. Instead, they are incompetent stuntmen.

Known for the creation of the Pony Express, Buffalo Bill becomes a crazed tabloid artist obsessed with the paranormal.

The famous mobster has given up organized crime and now leads a gang of birthday clowns, who make a joke of his business.

The fierce Hun leader is anything but fierce, or a leader.