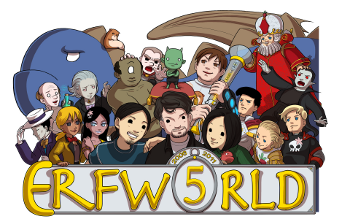 Front: creator Rob Balder, artists Jamie Noguchi on the left and Xin Ye on the right. Right: King Slately at the top, pushing down Vinny over princes Ansom, Tramennis, and Ossomer. Center: Parson Gotti, a gobwin, Stanley The Tool, and Bogroll. Left: Maggie and Sizemore behind Wanda, Jillian, and Jack Snipe. Back: a blue dwagon and Hamstard.
One world's game rules can be another world's physics.
One world's "cuddly" can be another world's "deadly".
And one world's misfit, misshapen loser can be another world's perfect warlord.
At least... he'd better be.
The enemy's on their way.
— Book 1, The Battle for Gobwin Knob (back cover)
Advertisement:

is a Webcomic written by Rob Balder (of Partially Clips

), with the first book The Battle for Gobwin Knob illustrated by Jamie Noguchi (of Angry Zen Master

and Yellow Peril), and the second book, Love is a Battlefield, illustrated by Xin Ye. The incomplete third book, Hamsterdance vs. the Charlie Foxtrot, was being illustrated by David Hahn until Xin Ye returned with Lauri Ahonen doing inking and colors. There were also various short stories and novels posted as filler and crowdfunding rewards between pages of the comic.

due to a series of tragedies in the author's life over the last year and a half of its run. Archives are still available online. One of these archives is available here

A fanatical, obsessed gamer geek named Parson Gottinote an anagram for "protagonist" gets magically summoned to another world to be the "Perfect Warlord" for a city that's losing a war, in a world that seems to be one giant Turn-Based Strategy wargame. (For instance, nobody can move beyond the immediate vicinity when it's not their side's turn.) Plays with many different strategy game tropes. Includes cutesy, Super-Deformed art and dark characterization, landing DEEP in the territory of Grotesque Cute. Many features of Erfworld are references to real-world popular culture and Internet memes.

Before Erfworld had its own site, it was hosted on the Giant in the Playground

website, but it is otherwise unassociated with Rich Burlew (of The Order of the Stick).

Now has a Referenced page.

open/close all folders
Tropes # to I
Tropes J to Q
Advertisement:
Tropes R to Z