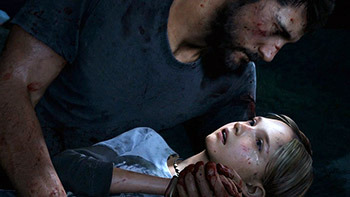 "(I Just) Died in Your Arms"
Advertisement:

Sarah dies in the live-action TV version of "The Last of Us".

Even so, it's a tearjerker moment and it sets the mood of what viewers should expect out of this show.

Sarah dies in the live-action TV version of "The Last of Us".

Even so, it's a tearjerker moment and it sets the mood of what viewers should expect out of this show.