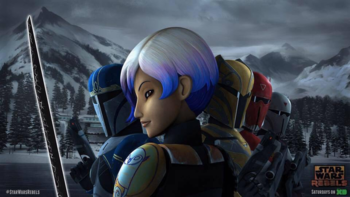 "You could lead Mandalore."
Ursa Wren: And your father called me stubborn. Now I see it in you.
Sabine Wren: What do you see?
Ursa Wren: A warrior. Not the one I had hoped, but still.
Sabine Wren: Well, I am your daughter. How could I be anything less?

Hoping to get her family to help the rebels, Sabine returns home with Kanan and Ezra, and finds herself embroiled in her family's power struggle for Mandalore.