Film / Woman on the Run 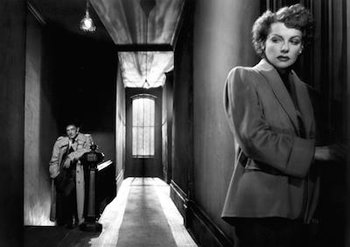 Don't trust anyone...
Woman on the Run (1950) is a Film Noir starring Ann Sheridan and Dennis O’Keefe, co-written and directed by Norman Foster.
Advertisement:

Frank Johnson (Ross Elliot) has just witnessed the murder of an informant and is told by the police that he must ID the murderer. Scared of being picked off by the gangster killer, Frank runs away from the police. Detective Farris (Robert Keith) then turns to Frank’s wife, Eleanor (Sheridan), who begrudgingly helps with the search until she decides to find Frank herself.

Eleanor gets help of newspaper reporter, Dan Legget (O’Keefe), and she discovers that her husband and Legget aren't what they seem.

This film is also in the Public Domain.

Do NOT confuse this with the sex-ploitation film, Women on the Run (note the plural term).