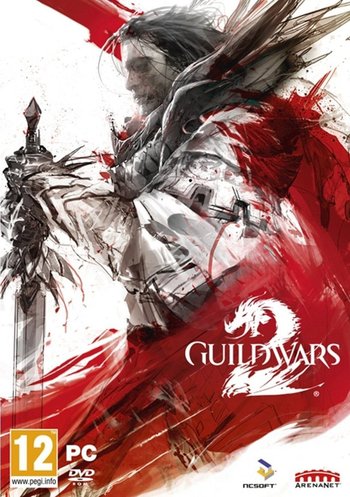 For generations, war and chaos raged across the land of Tyria. Then the dragons woke.
Advertisement:

The sequel to Guild Wars, Guild Wars 2 is an MMORPG developed by ArenaNet and published by NC Soft. Like the original, there are no monthly fees. In addition, with the release of the first expansion, the core content has become free to play, with a few relatively minor restrictions. Purchasing the game gives full access to both the core and expansion content with no additional cost. Unlike the original, much of the PvE content takes place in persistent zones, while instanced ones are still used in the form of dungeons and story missions.

The game is set in the continent of Tyria, on the world of Tyria, 250 years after Guild Wars. Six Elder Dragons have awakened and are wreaking havoc across the planet; cutting off continents, flooding cities and, in the case of Zhaitan, raising undead armies.

The following races are playable:

The game has eight core professions available, with a ninth — the Revenant — introduced in the Heart of Thorns expansion. These classes are divided into Scholars (light armor), Adventurers (medium armor), and Soldiers (heavy armor). Any race is able to play any profession equally well and each profession has a "unique mechanic" that greatly distinguishes it from the others. With the release of Heart of Thorns every class also gains access to an elite specialization, which adds new mechanics to the existing ones and possibly broadening the experience with those classes. The first indentation is the specialization that requires Heart of Thorns to access, the second are the ones that require Path of Fire, and the third require the upcoming End of Dragons.

Information about classes and specializations

The game has a level cap of 80, with skills and abilities being a mixture of weapon choice and individual customization. Instead of traditional quests, it makes use of 'Dynamic Events' and 'Renown Hearts', which simulate quest conditions out in the world for the player to solve rather than filling up a quest log in a town. There are also individualized personal stories based on a player's race and what choices they made during character creation. Some characters will also react differently to players depending on their class, race or background selection.

Since January 2013, the developers have released regular "Living Story" updates. These updates provide episodic story chapters that last roughly a month before being made unavailable. Since these updates are all building towards a bigger story, for people who want to catch up, a summary of the story so far can be found on the game's official wiki

, and some kind Youtubers have thoroughly recorded all of the story update content.

As of July 2014, the Living World has become more episodic, with a storyline unlocked for level 80 characters if they log in during the 2-week span and then able to play through the story whenever they want on all characters. Players who do miss this window will be able to buy the chapters for gems.

On October 29th, 2015, ArenaNet released their first Expansion Pack, "Heart of Thorns". This expanded the game by adding explorable areas to the west, adding a new class, and giving each class ways to expand via elite specializations. Unlike many modern MMOs, the level cap has not be raised, and there is no new gear tier. November 17th added in other elements promised in the expansions, such as raiding, the new squad interface allowing for a party of 10 players, and new legendary weapons that can be unlocked. Heart of Thorns was followed by Living World Season 3, expanding on the White Mantle faction from GW1 and providing new locales to explore all over Tyria.

After a major leak of information, Anet officially confirmed that they were working on a second expansion intended for release some time in the second half of 2017. On September 23, 2017, the second expansion, "Path of Fire" was released, taking place in the Crystal Desert and northern Elona. Mounts were added to the game, with each unique animal offering new forms of movement through land, sea and sky. A new set of elite specializations were also added for each class. Living World Season 4 followed afterwards, focusing on the dragon Aurene as she reached maturity and dealing with the remaining threats in Elona: Kralkatorrik, and Palawa Joko.

When Season 4 finished in May 2019, ArenaNet moved immediately into Living World Season 5, known as "The Icebrood Saga", dealing with Jormag and a new threat arising from the charr horde. During a livestream celebrating the 8th anniversary of Guild Wars 2, a third expansion, "End of Dragons", was finally announced, promising a return to the highly requested Cantha. "End of Dragons" was released on February 28, 2022.

Path of Fire expansion introduced the Deadeye elite specialization for Thieves, allowing them to wield rifles and use cantrips of shadow magic.

Path of Fire expansion introduced the Deadeye elite specialization for Thieves, allowing them to wield rifles and use cantrips of shadow magic.