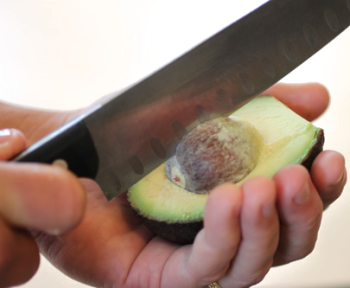 Edgy meets Hardcore.
"Hard Core" (also written "hard-core" and "hardcore") is a generic term used to describe the most extreme, edgy, and intense portion of a given genre or fandom.
Advertisement:

"Hard Core" music can refer to one of two different types of music: an offshoot of punk rock known for its rebelliousness, screaming, and emphasis on edginess over technical skill, and a techno off-shoot characterized by fast tempos and the use of atonality and dissonance. There is also Hardcore Hip Hop, which talks about topics such as violence and anger.

In Professional Wrestling, "hardcore wrestling" is another name for Garbage Wrestling (a style of wrestling that emphasizes violent brawling and makes heavy use of Improvised Weapons such as chairs and fist loads), as well as promotions that feature it as a major part of their product (e.g. FMW, ECW, CZW, Pro Wrestling Guerilla, and Attitude Era WWF). Also, the term "hardcore wrestler" can be used to refer to either a Garbage Wrestler (e.g. Mick Foley, New Jack, The Sheik) or a Spot Monkey (e.g. Sabu, Jeff Hardy, Rob Van Dam).

In gaming, this is effectively impossible to define, but is usually thought of as those who believe that true "hard core" games require enthusiastic commitment and casual video games should be ignored, if not locked out of "gaming proper" by definition (meanwhile, some groups think all video games are for kids). In terms of marketing, there actually is a definition the industry uses for demographics to separate "core" games (i.e. games for gaming hobbyists) and "casual" games (i.e. games aimed at everyone). To put it another way, hard core gamers play for a challenge while casual gamers play for general fun, which is not to say hard core gamers are automatically "Stop Having Fun" Guys. In fact, some hard core gamers will play at a disadvantage in order to create a bigger challenge.

When referring to fans, hard core can either be a pejorative ("Dude, did you see that guy with a Mario tattoo? I'm glad I'm not that hard core") or complimentary ("That Mario tattoo is hard core, man"). Generally speaking, anyone who calls themselves "hard core" is either joking, a little too into it, or full of it.

Note that, in some circles, "Hardcore" can be used to refer to a work, rather than a fanbase. The usage varies depending on the medium involved; for example, a hardcore anime is a sexually-explicit one, while a hardcore professional wrestling match or promotion is an extremely violent one with no rules and a large amount of garbage wrestling.

Interestingly the phrase also has a mundane meaning that goes back at least as far as the romans and is therefore Older Than Feudalism. Hardcore is the builder's term for the aggregate of largely recycled materials used as infill in walls or as underlay beneath a road or concrete floor. Mediaeval castle walls are largely hardcore packed in between inner and outer faces of stone.