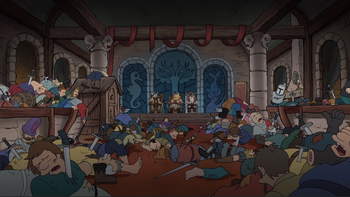 The massacre.
"Oh god, my dad is gonna kill us. And then the Vikings are gonna kill my dad."
—Bean
Advertisement:

Bean sneaks a guy into her room, feigning being a normal girl that likes to break in the castle. He quickly figures it out and leaves, saying that he heard how her suitors tend to die.

Sorcerio and Odval talk about plans to reunite a secret order when the King leaves. Sorcerio reveals to Zog that there still no advances on the elf's blood research. During dinner, Zog drinks water from the local fountain, which is polluted and dirty to the point of making him incredibly sick as soon as it was drank. Oona and Derek take him to a spa where he can be healed. Zog tells everyone to not make anything while he is away, leaving Odval in charge. As soon as the King leaves the castle, the court rejoices that he left.

Bean decides to throw a party, and Elfo is convinced to join when Luci implies he may be able to get with Bean during the party.

Meanwhile, on the spa, Zog is chained to a table and is interviewed by a strange and possibly lunatic man called Chazz.

Bean wants to find someone to hook up in the party she'll throw, which fills Elfo with hope to get with her. Bean lets the word out about a wild party on the castle at night and the word spreads like wild fire to the whole kingdom. After preparations are done, Bean finds out a lot of people came to the party. Sorcerio and Odval start their secret meeting, which turns out to be some kind of sex party. As the party goes on, Bean still finds it hard to find someone to date, and tries time after time again, with different approaches, to get together with a guy, but all of them turn her down. Elfo eats a lot of cheese in the party alone, but is pushed by Luci to get going and talk to Bean.

Bean and the Viking Leader, Sven, get to her room, which she pretends to be Bunty's. Elfo is alone among the couples formed in the party, but gets fed up and goes to Bean's room to stop her fooling around from Sven, letting it slip that Bean is the princess and that the court is working on the Elixir of Life. Sven changes his priorities and leaves Bean behind. Elfo realizes he has been a party pooper and hasn't done Bean any favors, and Bean decides to end the party. The two go downstairs to see that the party goers have all been murdered and Sven occupies the throne, who has taken the throne. After being outnumbered greatly, Bean, Elfo and Luci are thrown in front of Sven.

In the spa, Zog breaks free and runs away, and it's revealed that it's all part of a crazy treatment.

Hearing that Zog is coming back, Bean needs to crack up a plan to get rid of the vikings. She seduces Sven into accepting her as his queen and saying that she has the Elixir of Life. Elfo and her lead the vikings to the castle's polluted fountain and, after Elfo drinks a bit to prove that it's real, convince all the vikings to taste from the fountain. All of them get severe stomachache instantaneously and run into a trap on the middle of the castle, hanging in the trap door on the throne room, which Bean pushes them from.

Sorcerio and Odval come back and agree to help her clean up if no one talks about this night ever again. They quickly clean up the castle from corpses and from the party sufficiently for Zog that just came back to not suspect anything. Bean, Elfo and Luci watch the sun rise together afterwards.

In the following morning however, Zog pokes the fireplace finding out all the bodies the group hid.