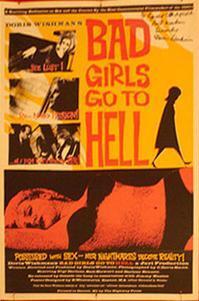 Bad Girls Go to Hell is a 1965 film directed by the queen of 1960s nudie movies, Doris Wishman.

Meg (Gigi Darlene) is a housewife who, one lazy Saturday morning, would like nothing more than for her husband Ted to have sex with her. Ted manages to resists the charms of his smoking hot wife, because he has to take care of some things at the office. So he goes to work.

Left to her own devices Meg does a little light cleaning before stepping out of the front door of the apartment...where she is immediately assaulted by the janitor. When he hears someone coming he lets her go, but later, he slides a note under her door demanding that she come to his apartment or he'll tell her husband. Like a moron Meg goes, and sure enough the janitor tries to rape her again. This time she winds up whacking him over the head with a ceramic bowl. She kills him.

Panicking, with blood spattered over her face and a dead guy on the floor, Meg decides that no one will believe her, so she must get out of town. She takes the train from her home of Boston to New York, hoping to fade into the crowd. She has a lot more adventures that tend to involve rape, attempted rape, and women in lingerie.