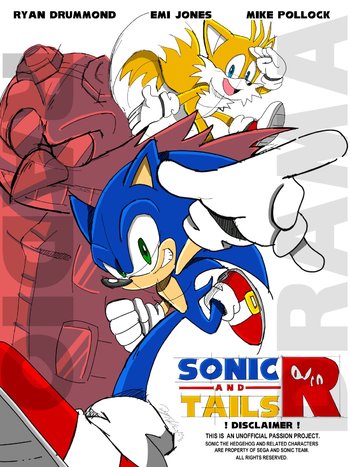 "Did you miss me?"
—Sonic the Hedgehog

Sonic and Tails R is a fan-made audio play created by EmuEmi, based off of the Sonic the Hedgehog franchise.

It opens with a classic battle between Eggman, Sonic, and Tails, which takes a turn once the latter reveals that he's recently found the seventh Chaos Emerald. When Eggman attempts to steal all seven from Sonic with a tractor beam, they end up shattering and spreading out all over the world. This sets the stage for Sonic and Tails to embark on another globetrotting adventure to find and restore them all.

The first episode can be watched here

The play features the following tropes.