Literature / The Song of Achilles 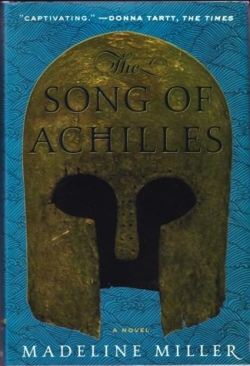 ''I could recognize him by touch alone, by smell; I would know him blind, by the way his breaths came and his feet struck the earth. I would know him in death, at the end of the world.'
"I know. They never let you be famous and happy." He lifted an eyebrow. "I'll tell you a secret."
"Tell me." I loved it when he was like this.
"I'm going to be the first." He took my palm and held it to his. "Swear it."
"Why me?"
"Because you're the reason. Swear it."
Advertisement:

The Song of Achilles is a 2011 novel by Madeline Miller. It retells the events of, and leading up to, The Iliad from the point of view of Patroclus, the beloved companion of Achilles.

Patroclus is a disappointment to his father, and is still young when he is exiled to the island of Phthia, to be an attendant on the half-divine Achilles. But Achilles takes a shine to Patroclus, and it's not long before they're best friends, and then lovers. They learn the art of heroism from the great teacher Chiron, and want to live happily ever after... but then word comes of a great war, brewing between Troy and Sparta. Patroclus is bound to go, by oath. Achilles is bound to follow him, for love and glory.

The novel won the 2012 Orange Prize for Fiction, and is Miller's first published work.