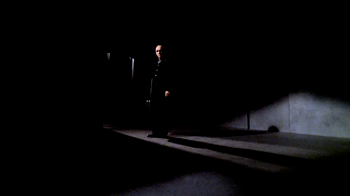 "Do you have any allergies or illnesses that I should be aware of? Are you currently taking any medication? Have you had any trouble with your heart? Good, then we can begin."
You have no rights. There's no courtroom here, Captain. No tribunals, no attorneys, no justice, no mercy, no fairness, no hope, no last minute escape. You will walk through that door when you confess and not one second before.
-The Interrogator
Advertisement:

Sheridan lies curled up in the corner of a dark room, thinking back on the events that led up to his betrayal by Michael Garibaldi and his capture by Clark's forces. Eventually a door opens and a nondescript looking man comes in, followed by guards bringing in a table and two chairs. As they leave, the man begins asking questions about Sheridan's health, any allergies, illnesses, medications, or heart troubles. Clearly interrogation is about to start and Sheridan doesn't say anything.

The interrogator instructs him to answer questions immediately and honestly or face the consequences, and Sheridan goes to probably throttle him but as he gets close pain givers on his neck and arms go off, giving him an electric jolt. The interrogator just begins unpacking his briefcase, like it's just another day in the office, explaining that he's not the enemy here, he has no personal stake in this, it's just a job, and how uncomfortable this gets is entirely up to Sheridan. When asked, he explains he's there to ensure Sheridan's cooperation and will do whatever it takes to get it. He taps a control and the guards come in again and strap Sheridan to one of the chairs. The interrogator again asks if he has any health issues, and Sheridan says no. The man smiles and says they can begin.

Sheridan has apparently been left strapped to the chair for some time when the interrogator comes back in. He turns off a light that has been left in Sheridan's face and removes it before going back to his table. "Good morning." Sheridan says it's not morning, since there was light coming through the door earlier and now there isn't so it's night. The interrogator goes and turns the light on and off several times before leaving it on and calling it morning, so good morning. Sheridan is not amused. The interrogator takes off his coat and pulls some things out, goes to get his glasses which he forgot and zaps Sheridan for contradicting him. He spends the next few minutes writing in a notebook, looking over files, then checks his watch, says it's time for lunch and grabs a sandwich.

Looking over Sheridan's record he notices Sheridan has never been political. Which, according to Earth, would not make him likely to go around trying to overthrow the government unless he'd been influenced by other people. Sheridan says no, but the interrogator points out that everyone's influenced by the people around them, why wouldn't he be? Unless he's completely cut off from others. Sheridan snorts in disgust and the interrogator jots it down as a "fabrication".

He then comments on his corned beef sandwich, how it's done just right. He offers some to Sheridan, since it's lunch time, isn't it? Isn't it? It can't be morning, corned beef sandwiches are for lunch, so is it lunchtime? Sheridan says it probably is somewhere. The interrogator seems pleased with that and lets him have the sandwich. Sheridan's about to take a bite when he pauses. The interrogator reminds him that he already ate part of it. They have no interest in killing him...yet. Sheridan starts scarfing it down.

The interrogator begins talking about truth, how it's such a subjective thing and can be molded depending on what we perceive.

Interrogator: Out there it doesn't matter what time it is; in here, it's lunchtime if you and I decide that it is. The truth is sometimes what you believe it to be, and other times what you decide it to be. My task is to make you decide to believe differently, and when that happens the world will remake itself before your very eyes.

Sheridan protests it'll never happen, but the interrogator says he does it all the time. First the Minbari were the enemy, then suddenly they stopped being the enemy, both were the truth at different times. And now Earth Force is the enemy, it all depends on what you believe and what others tell you. As a soldier, Sheridan should be very familiar with this, it's the nature of his job to enforce the policies of his superiors, even if they were the exact opposite the day before. Unless he's rejecting everything he claimed to stand for.

Sheridan eats the last of the sandwich and says it was pretty good. The interrogator accuses him of being evasive, which he thinks is better than being dishonest. The interrogator begins pointing out all the changes in stance Sheridan's made just since they've been in the room together, whereas he has spoken nothing but the truth. "Just remember it's time for supper."

The interrogator then begins casually talking about taking small amounts of toxin to build up an immunity to it, so you can eat something, a corned beef sandwich for example, that had said toxin on it without ill effect. Sheridan won't be so lucky, and the interrogator says he'll be back after they've cleaned up.

When the interrogator returns, Sheridan is lying on the ground still feeling the effects of the toxin. "Good morning." He comes over to check on Sheridan, then apologizes for having to do that, it's just part of the process. He finds it distasteful, but there's nothing he can do. They don't listen...well they do, at random points during the day, and if they don't hear results the consequences could be dire. It'd be better to just cooperate, then they'd let him go.

Since Sheridan's dehydrated, the interrogator offers a drink of some kind, completely free of anything unpleasant. He recommends small sips.

He then begins talking about some records, trying to confirm if Ivanova is still his XO. Sheridan is reluctant to tell him, just because he wants it, but the interrogator reminds him that he doesn't want anything, but his superiors do. He asks if Sheridan is feeling better ("Yes.) then invites him to come over. Sheridan struggles to his feet then goes over to the other chair.

The interrogator then mentions that he ran into Sheridan's father, who sends his regards. Why? Why not? He had no reason not to, so he did. And he expects a thank you, which Sheridan reluctantly gives. Of course, they'll be holding his father until Sheridan cooperates as well.

Next question: been interrogated before?

Sheridan: Yes.
Interogator: Anyone I know?
Sheridan: You'd be surprised.

The interrogator then pulls out some papers, explaining that it's Sheridan's confession to treason, mutiny, conspiracy, terrorism, illegal seizure of Earth property, assault, and various other up to the murder of the crew of the EAS Roanoke. Sheridan shouts that he won't sign it, but the interrogator fires back that he will, and read it in public and name his accomplices. And apologize for his actions then plead for mercy. Sheridan demands an attorney and a hearing before a military tribunal. He has the right...right? What right? In here there are no rights. Only a confession that he will sign if he ever wants to see the light of day again. The interrogator has had enough for now, and leaves.

When he comes back ("Good morning.") he has a sobbing Drazi brought in, who begins to record a confession that he was among those who influenced Sheridan and turned him against Earth. Sheridan keeps trying to talk the Drazi out of it, but the Drazi is too afraid to refuse. Sheridan keeps telling him not to give in, not to give them what they want. He extols the bravery of the Drazi, their strength and pride. Eventually the Drazi looks him in the eye, and says he has nothing further to say. The interrogator urges him to continue, but the Drazi will not cooperate any longer. The interrogator begins asking the Drazi if he understands that this is his last chance, as Sheridan asks what's going to happen. The Drazi just says, "yes", and despite Sheridan's protests is removed from the room.

The interrogator orders him taken to Room 17, then picks up with trying to update the record on Ivanova or contacts in the Resistance until Sheridan demands to know what will happen to the Drazi. The interrogator sighs and pinches his nose, and just says he was expendable. They're all expendable, except Sheridan, at least until the higher-ups lose patience. He again encourages Sheridan to cooperate, it would make everything a lot easier. Suddenly the Drazi is heard screaming from somewhere else. The interrogator apologizes again for what they have to do then packs up for the day. Before he leaves he starts a recording telling Sheridan to confess and conform to the state, over and over and over...

Sheridan eventually falls asleep until the interrogator comes back and turns the recording off. "Good morning." He takes down Sheridan's nutrition IV, and warns him not to take it any further. They've already restricted him from solid food. He again takes out the confession and tells Sheridan that they're not keeping him here, he's keeping himself here.

The interrogator explains that they don't want him dead, they want him to be seen, to meet people, travel, be a symbol of the preeminent truth of the time, that you cannot beat the system. They will come eventually, but it won't be for a while, they'll wait until he's been forgotten, it'll be quick, but until then he will have his freedom. As the interrogator begins encouraging Sheridan to sign again, he suddenly sees Delenn standing there, watching him. The interrogator releases him, and he reaches over...and spits on it. "No." The interrogator looks disappointed, saying he wishes he hadn't done that. He says what comes next is out of his hands, then leaves as Sheridan allows himself a somewhat satisfied look.

When the interrogator comes back, there are no pleasantries. He tells Sheridan that as a war hero, he has a certain pull with the public, and when he begins to believe certain things, others start to believe certain things. And that's a problem since his views are currently at odds with the State's. It's either one or the other, and they've decided they can make do without him. They can forge his signature and create his image and that will have to do now.

The interrogator gets up and asks one more time if he will sign a confession, "No", then calls for the guards to take Sheridan away. As he is carted down a hall to Room 17, a priest reads his last rites, and as they approach the lit room, he sees Delenn waiting for him.

He is brought into the room where a hooded figure waits for him. The figure leaves...then the guards come back, strap him to a chair and another interrogator comes in ("Good morning") and the whole process starts over again, while the figure comes back and takes off his hood to reveal the drazi. Sheridan resigns himself to having to resist them all over again.