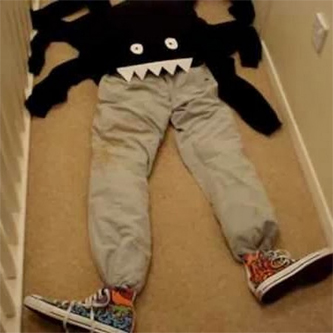 is a British YouTube channel which showcases the many, many deaths of Joe, with the most realistic visual effects you can imagine.

A typical video involves Ted, an often, though not always, unseen person behind a camera, asking how Joe's most recent task is going. Usually something like mowing the lawn, fixing a drain, or experimenting with Black Holes. Ted then finds Joe, who is actually a shirt and a pair of pants stuffed, killed off in a completely ridiculous way. Ted gasps "Noooo....", and the video ends. There are, of course, variations on this, but Ted, in real life, has said that one of the main points of these videos is to redo the same joke over and over again, and for it to get funnier as you know the punchline coming in advance.

The channel was started back in 2006, and has become semi-viral, with its videos having received over 115,000,000 views in total. Many of these can be attributed to the eye catching titles, like "Snake eats Kid alive caught on tape", or "Horrific accident, man sucked down drain", only for them to actually be purposefully cheap videos of a shirt being hit by a ball, or something to that extent.

After over a year long break of making videos, Ted started uploading videos again in February of 2014.