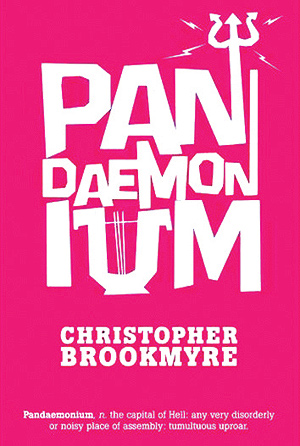 A novel by Scottish author Christopher Brookmyre, published in 2009.

Pandaemonium is Brookmyre's 13th novel; it's a stand alone and it's a bit different from his other works. That being said, the style and tone is still very much recognizable as being Brookmyre's.

Secluded somewhere in Scotland, the U.S. Army is carrying out a top-secret military experiment which has led to such astounding results they've called on the Vatican itself for advice and support: They fear they may literally have opened the gates to hell. The project's scientists, however, are not impressed with this explanation and even less impressed with the clergy taking control, and discord abounds.

In the meantime a busful of Scottish teenagers and their put upon teachers are heading for the area's outdoor activity center where they will (officially) be spending the weekend therapeutically coming to terms with a fellow student having murdered a classmate before commiting suicide, or (realistically) gossiping, partying and getting drunk and high on what they've smuggled along and (optimistically) getting laid.
The teens think the greatest challenges they will face this weekend are finding someone to hook up with, avoiding teacher detection and interference, avoiding ending up rooming with someone undesirable, and avoiding aggravating Big Kirk. They are, of course, very much mistaken.