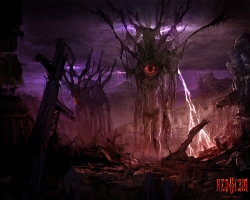 "It has become appallingly obvious that our technology has exceeded our humanity."
— Albert Einstein

Requiem is a free to play Korean MMORPG set in a world ruined by abuse of science and magic. Developed by the makers of Ragnarok Online and released in 2008, it features more conventional 3D gameplay and a Darker and Edgier world. Originally called Requiem: Bloodymares, its name changed to Requiem: Momento Mori note A latin phrase which translates to "Remember, you will die" following the Expansion Pack of the same name.

There are currently four playable races in the game; The human like Turan, the physically powerful Bartuk, the inhumane Kruxena, and the futuristic and childlike Xenoas. Each race comes with two classes, with each class receiving two subclasses.