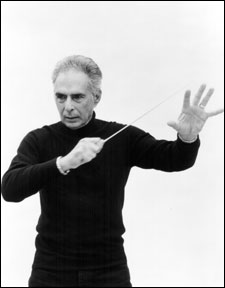 William "Bill" Conti (born April 13, 1942), Oscar and three-time Emmy Award-winner, is one of Hollywood's most sought-after composers and conductors for both film and television, but whose talents have inexplicably fallen out of favor in recent years.

Born in Providence, Rhode Island, Conti began studying piano at age seven under the tutelage of his father, an accomplished pianist, sculptor and painter. At the age of 15, he organized a band and began to play for high school dances in Miami, Florida. He was a member of his high school band and symphony orchestra and won the "Silver Knight Award" from the Miami Herald for high achievement in the field of music. After Conti received his Bachelor of Music degree from Louisiana State University, he auditioned and was accepted at the Juilliard School of Music in New York where he studied with such musical greats as Hugo Weisgall, Vincent Persichetti, Roger Sessions, Luciano Berio, and Jorge Mester. In 1965 Conti won the Marion Feschl Prize for having composed the best song of the year. He received a Bachelor of Music degree from Juilliard, followed by a Master's Degree.

He made his film music debut in 1969 on the Italian film Juliette De Sadenote credited as Helen Gray!, directed by Warren Kiefer. His rise to fame was slow – he did not become internationally recognized until the mid-1970s, when he was plucked from relative obscurity to act as musical director for Paul Mazursky's 1973 film Blume in Love. Throughout the 1970s and 80s, Conti was a popular and successful Hollywood mainstay, achieving world-wide fame for his legendary songs "Gonna Fly Now" from Rocky (1977) and the title song from For Your Eyes Only (1981), and winning an Academy Award in 1983 for his score for the classic astronaut movie The Right Stuff.

For the small screen, Conti also composed the themes to Dynasty (1981), The Colbys, Falcon Crest, Cagney & Lacey, and Lifestyles of the Rich and Famousnote actually a case of a Recycled Soundtrack as it came from his score for 1978's Uncle Joe Shannon, and wrote the theme song to the original version of American Gladiators, and The Master. His music was also heard through the 80s on CBS, as it was used to introduce their movie presentations- as seen here

. Gonna Fly Now was also reused for years by the original Citytv in Toronto as the theme for their groundbreaking newscast CityPulse (though only the first two years or so actually used Conti's version; a remix done by Maynard Ferguson was used from the early 80s into the early 90s, with newer themes maintaining the melody being used after that).

Since 1977, Conti has served a record 17 times as musical director of the annual Academy Awards telecast.

Films scored by Bill Conti: (in order of appearance; not a complete list)