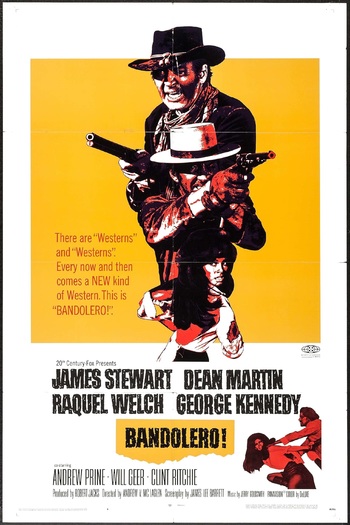 In a Texan town, Mace Bishop (Stewart) frees his brother Dee (Martin) from the gallows after Dee and his gang were arrested for a bank robbery. Dee and his gang take Maria Stoner (Welch), whose husband was killed by one of Dee's gang members during their bank robbery, as a hostage. The fugitives are chased by local sheriff July Johnson (Kennedy) across the Mexican border into territory policed by bandoleros, whom Maria describes as men out to kill any gringos that they can find. The sheriff's posse tracks them down and captures the gang, but the bandoleros also arrive, forcing the sheriff the release the outlaws so that they can fight back. Complicating matters, Maria falls for Dee.

Not to be confused with the Spanish animated series Bandolero.