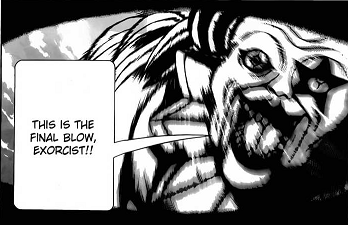 When we say D.Gray-Man is a dark series, we mean dark. While it started out as horror-shonen, slow Genre Shift with the development of the Myth Arc has driven it more and more out of the realm of standard horror... which has, ironically, made it much scarier. Read on for a bonanza of Body Horror, Uncanny Valley, and Adult Fear that might make it hard to sleep at night.