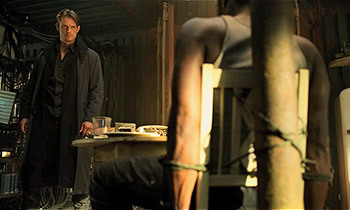 Title from: Fallen Angel (1945)
"Peace is an illusion. No matter how tranquil the world seems...peace doesn't last long. Peace is a struggle against our very nature. A skin we stretch over the bone, muscle, and sinew of our own innate savagery. The instinct to violence curls inside us like a parasite, waiting for its to feed on our rage and multiply until it bursts out of us. War is the only thing we really understand. Technology advances, but humans don't. We're smart monkeys, and what we want is always the same. Food, shelter, sex, and in all its forms...escape. I knew a shouldn't go, 'cause when the victors rewrite history, it's just another kind of war. Waged after the battlefield killing is done...to murder the memory of the defeated. But it was a chance to see her again, not as a dream or a hallucination. I thought it would give me a moment of peace. I should have known better. The moments of peace that we find sometimes...they aren't anything but warfare, thinly disguised. And sometimes surrender can be as savage as any attack. "
— Takeshi Kovacs, Opening Narration

Kovacs begins investigating the long list of people who have threatened Laurens' life, while Ortega keeps tabs on him.