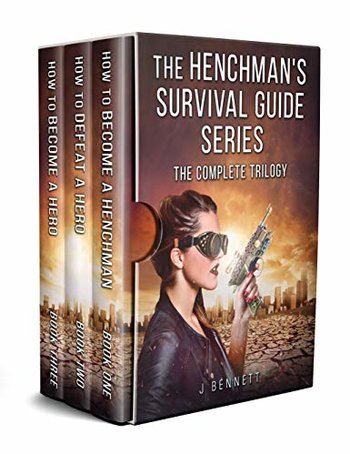 The Henchman's Survival Guide is a series by J. Bennett, set in the future in Big Little City, a town owned by PAGS, a media conglomerate that wields immense power, and in which they stage superhero and supervillain battles as a series of reality shows. Artificial Intelligence has made irrelevant most jobs humans previously held. Pollution and global warming have wrecked much of the United States. Universal Base Income is assured, as is Universal Health Care, but UBI doesn't cover rent and food in most cities, and you have to be almost dead to take advantage of the health care. Due to the utter irrelevance of most people's existence, much of the population spends their days immersed in Virtual Reality, or obsessing over the latest superpowered gossip, dulling their emotional pain with drugs. All of the social media platforms have been merged into a single stream, managed by computer wristbands and AI assistants. And in Big Little City, where citizens receive cheap housing and schooling in exchange for the risk of being a casualty of a supervillain attack, anyone might be discovered by getting into the footage that airs.

Enter Alice, a resident of Biggie LC, who could care less about gaining fame and fortune, and is studying to find a way to change her world for the better. However, between her fame-obsessed roommate, the fact that her landlord used to be the prominent villain, The Professor, and that she soon determines her lab partner, Adan, is also Shine, sidekick to BLC's most prominent heroine, Beacon, she can't stay entirely apart from it. And when the rogue supervillain, Shadow, blows up her place of employment, she's forced to do the one thing she doesn't want to do, join the entertainment industry and become a henchman in How to Become a Henchman.

In the sequel, How to Defeat a Hero, Alice has obtained her goal, but her show is on the verge of cancellation, so she has to find a way to up the ante and ensure that her team remains considered relevant, by plotting a scheme against the rules. Faced with an executive board that has an axe to grind against her, teammates who just might betray her to make their own role more prominent, and a friend who has betrayed her, she has to weigh her need for success as a henchman against her dislike for the entertainment machine and the people it grinds up to lubricate its gears. She has had to lie, cheat, and betray to get to this point. Can she find a way to redeem herself?

In the third book, How to Become a Hero, in the aftermath of the horrific fight in Iconic Square, the heroes and villains are united against the threat of Shadow. But alliances can last only so long before someone decides to pursue ratings. Alice attempts to redeem herself and save Lysee, but is caught in the act, and has to face the prospect of being fired, hopefully not from the Atomic Cannon.

There is also a short novella, How to Become Golden, about Gold's origins, and how he wound up at the henchmen trials for The Professor's show, which involves him meeting much of the main cast before ending at the trials with him about to enter.