Manga / Owari to Hajimari no Miles 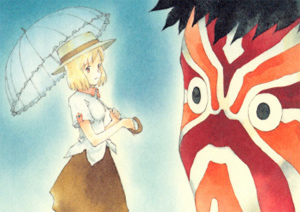 The two main characters, Miles and Gikaku. Yes, yes, they do look good together.
Advertisement:

Owari to Hajimari no Miles ("Miles of the End and the Beginning") is a manga by Mohiro Kitoh.

It follows the adventures of Miles, a spirit medium, and Gikaku, a rather light-hearted god of destruction. They live in the Sky Ring (or Orbis Vanus), a large archipelago of floating islands, in which objects infused with spirit in the Small World (or Mundus Parvus) incarnate. Miles and other spirit mediums have the responsibility to manage these spirit objects as they go through their life cycle, from the Small World to their machine heaven.

The manga began serialization in Manga Erotics F in 2006, but ended with no plot resolution in 2012. Since the magazine carrying it has ceased publication, it seems quite unlikely to be continued.