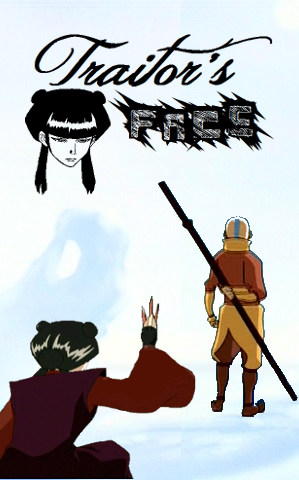 Um, Aang, you might want to turn around...
Advertisement:

Aang awakes from his century-long hibernation to look up into Fire Nation eyes, and Mai finds that her trip to the South Pole has taken a turn for the exciting. In this Alternate Universe, the only thing more powerful than love is the call of betrayal.

Traitor's Face is an epic by Loopy777

, a prolific author of Avatar: The Last Airbender fanfiction. It's a For Want of a Nail Alternate Timeline that gives Aang a new adventure when he emerges from his iceberg, as well as a new cast of allies. The story is a aversion of The Stations of the Canon, with the various "episodes" sharing at most a title and a setting with equivalent events from the original versions.

The story is broken up into separate acts that cover a major subplot. They roughly correspond with the Water, Earth, and Fire themes from the original cartoon, but instead of being focused on the type of Bending Aang learns, they mix the adventure and intrigue with showcases of the culture of the various nations. Spirituality and superstition are a bigger focus here than in the cartoon, and the Fire Nation is less unified in its leadership, leading to more stories with horror elements and political intrigue. The state of the war is also vastly different, leading to different backstories and contexts for the characters.

Due to the storyline drastically differing from the cartoon past a certain point, spoilers aren’t viable, as most of the pages would be hidden. As such, all spoilers up to the end of Act 2 are not hidden.

Traitor's Face can be found here

The traitorous tropes in this story include