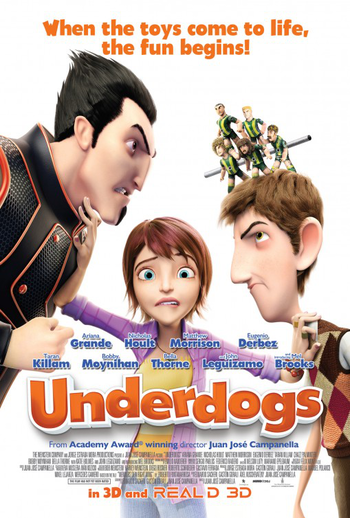 Metegol (Futbolín in Spain, The Unbeatables in the UK, and Underdogs in the USA) is an Argentine animated 3D sports film co-written and directed by Juan Campanella, inspired by Memorias de un wing derecho (Memories of a right winger) by Roberto Fontanarrosa.
Advertisement:

The film begins with the narrator, telling his son a story before going to sleep. In this story, Amadeo, the best foosball player in his town, is challenged by a boy called Grosso to a foosball game. Although Grosso initially wins, Amadeo ends up victorious, earning himself the wrath of Grosso, who swears he will get revenge for this defeat.

Years later, just after Laura (the girl Amadeo likes) tells him she is planning to go to Europe and study there, Grosso returns, having become the best football player in the world, and announces he has bought the entire town and plans to destroy it to build a gigantic football stadium in there, but his actual interest is to take the foosball table where he suffered his only defeat, to destroy the bar where the table is and to gain Laura's affection.

With his entire life destroyed in one night, Amadeo discovers that his tears have awakened the foosball players, and after Amadeo manages to rescue them, he challenges El Grosso to a rematch, but El Grosso changes it to a football game, and Laura raises the bet: if Amadeo's team wins, Grosso will give the town back to its people.

But, sometimes, football is no place for miracles...

Metegol has examples of: