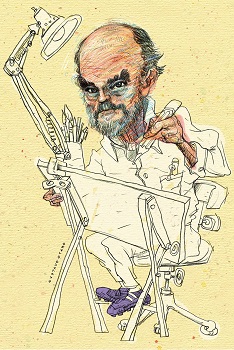 Roberto Alfredo Fontanarrosa (November 26, 1944 – July 19, 2007), better known as El "Negro"note In Argentina, is pretty common to call names after physical traits of a person, and isn't usually intended to be offensive. In fact, nicknames like "Negro" (black, or nigger), "Gordo" (fat), or "Flaco" (skinny) are pretty common and affectionate. See Spanish Language for more details. was an Argentinian writer and cartoonist of a long career. He was from the city of Rosario, province of Santa Fe, known mostly by his characters Inodoro Pereyra (el renegáu) and Boogie el Aceitoso. He was regarded by his affectionated parodies, his humour, his affability and his Creator Provincialism, as his fame never changed him. He was awarded as a "Persona Destacada de la Cultura" (Honoured Person of Culture... sort of), and he has participated in many forums, as the meetings of the Third International Congress of the Spanish Language, in 2004, where he gave a humorous lecture about taboo words and the final speech. Expect a lot of Played for Laughs

His work has examples of these tropes: