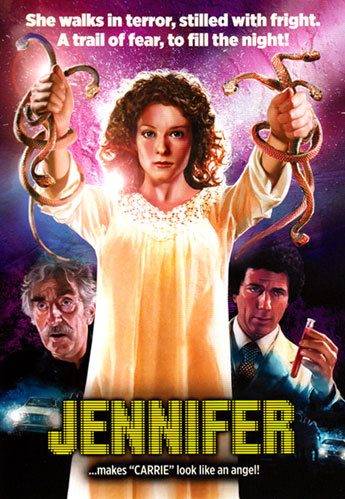 The story is about Jennifer Baylor (Lisa Pelikan), a rural country girl who wins a scholarship to a prestigious school for the rich. Despite being a top student, Jennifer is hated by most of the other girls, who consider her an outsider. The leader of their clique is the manipulative Sandra Tremayne (Amy Johnston), the daughter of an influential senator who has given the school huge contributions. As such, the school's principal always favors them, letting them get away with murder.

What they don't know is that Jennifer has special powers which give her control over snakes. Jennifer's father raised her as part of a religious cult, and tried to teach her to use her powers in their ceremonies. Unfortunately, it went badly wrong one day, and Jennifer has since repressed all memory of her abilities. Now, as Sandra and her friends torment her to the breaking point, Jennifer starts to remember, and begins to consider unleashing reptilian vengeance on her enemies...

It should be clear by this point where this movie got most of its inspiration from. It's right there on the poster. It also bears similarities to Willard, except with snakes instead of rats.

Tropes present in Jennifer include: