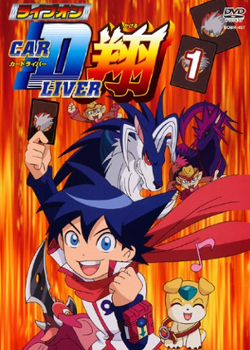 "My name is Amao Kakeru. It's my fifth year in grade school. This time around, the game that gets us all fired up . . . is called LiveOn! Those who battle using mysterious monsters called forth from cards are referred to as CardLivers. CardLive on!"
— Intro
Advertisement:

Amao Kakeru loves the mysterious card game called LiveOn, in which players can summon real-life monsters to life. The only problem is that he's never won a single game. Not only that, but he lacks a powerful LiveChange card that would allow him to transform into a monster himself. This all changes one day when he meets a mysterious puppy monster named Peddal who can create monster cards at will. From Peddal he gains the Tategami Wolf (Maned Wolf) card, allowing him to change into a pyrokinetic monster wolf that can talk to his monsters.

A Mons series in the vein of Yu-Gi-Oh! with a splash of Digimon.