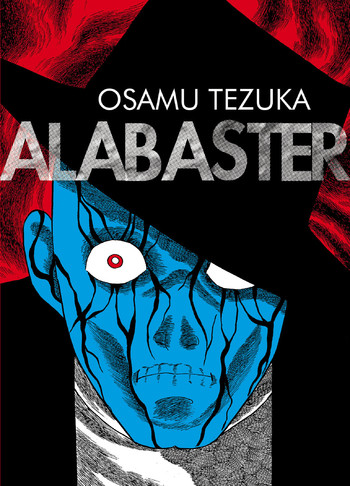 James Block/Alabaster
"A beautiful figure? It matters not when the heart is disfigured."
—Alabaster
Advertisement:

James Block, a young successful athlete, has the hots for Susan Ross, a beautiful movie star. Unfortunately, she doesn't want to marry him due to his appearance (read: black skin). In a fit of rage, James runs over a pedestrian while trying to car-chase her. While serving 5 years in prison, he befriends a scientist who tells him about a ray gun which can make someone invisible. Hoping to get rid of his black skin, James manages to find the ray gun but almost kills himself by exposing his body to it. With his body flayed, James is now "half-invisible" and decides to name himself Alabaster. He is now a twisted vigilante who aims to fix the world of what is beautiful.

Alabaster is one of Osamu Tezuka's lesser known works. According to a commentary of his, it's due to the fact that it was not well-received and that he disliked working on this manga in general, to the point that it was rarely re-printed. Its story, mostly centered around racism and the rejection of what's outside of the beauty norm, and its violent scenes and characters also make it one of the darkest stories by Tezuka.