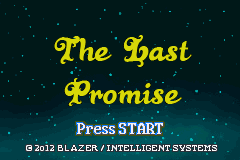 "Once, men and dragons coexisted. They shared a peace forged in wisdom, a peace that lasted many generations. All that was lost when dragons disrupted this balance in a sudden onslaught.
Man fought dragon in a savage war that shook the foundations of their world. This war was called The Falling.
Defeated and humbled, mankind vanished from the realm. In time, man rebuilt and spread his dominion across the land and onto the islands beyond.
A millennium has passed since those dark days ended."
— Opening narration for The Last Promise
Advertisement:

is a Game Mod of Fire Emblem: The Blazing Blade created by Blazer. Initially conceived as a forum hack titled Tactics Universe using fans' OCs set on the continent of Elibe several years prior to the game it's a mod of, Blazer later took control of the project and reworked it into the hack it is today, with it being considered fully completed in 2013.

The hack is set on the continent of Solum, and centers around a Ragtag Bunch of Misfits rebelling against the empire of Magnus. Though the game initially focuses on the father and son duo of Siegfried and Shon, the game shifts focus partway through to the motivational speaker Anakin and Kelik, leader of the Legend Mercenaries. The four ultimately team up along with their allies to take down the empire and free the people of Solum from their tyranny.

It's overall a simple plot, though its status as one of the first completed Fire Emblem ROM hacks helps it to stand out. It even includes a post-game mode, titled The Constellation, at a time where the only Fire Emblem game with any post-game content at all was Fire Emblem: The Sacred Stones. Though many ROM hacks have come out and been completed since, few have the reputation and polish that this one is known for.

Tropes in The Last Promise: