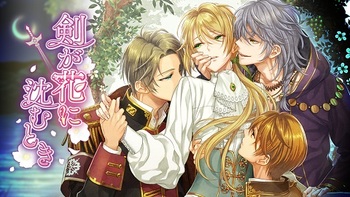 Les Fleursword is an Otome Visual Novel created with RPG Maker, developed by Magic House and localized/published in Chinese and English by Sakura Game. It had a Steam release on August 24th, 2017. Some of its content is not suitable for a younger audience.

Adelaide is the captain of the knights of Voldgeria, beloved by both citizens and subordinates. One day, her father, the commander, requests for her and a subordinate to investigate a merchant selling strange healing drugs; it's possible that they were created using magic, which stories say has been banned in the kingdom for ages, due to wizards abusing their powers. Unfortunately, Adelaide winds up being cursed in the process...

This game makes use of the following Tropes: