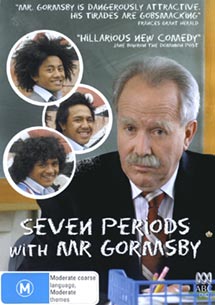 Seven Periods with Mr Gormsby is a New Zealand comedy series that ran from 2005 to 2006, with two seasons going to air. It aired in New Zealand and Australia.

It revolves around the fictional Tepapawai Boys High School, one of the worst schools, if not the worst, in New Zealand. In the beginning of the series, the principal, Roger Dascent, needs a teacher for the worst class in school, 5F. Everyone he asks refuses, until in despair, he asks his secretary, Lauren, "Is there anyone we haven't tried?" She gives him Mr Gormsby's file. Mr Gormsby (played by David Ellis McPhail) is a politically incorrect teacher, old fashioned to a fault, and a firm believer in corporal punishment. He carries a cane with him wherever he goes.

Mr Gormsby isn't Dascent's only problem, though- throughout both seasons, he has to deal with the Teachers' Union members going on strike, a school fire, a teacher/student relationship, the demands placed on him by the local Education Review Office reviewer, his own collapse into insanity, a car bombing, the constant lack of funds, incompetent teachers and the impending doom of Tepapawai's possible merger with the local girl's school. Naturally, once Gormsby enters, Hilarity Ensues.