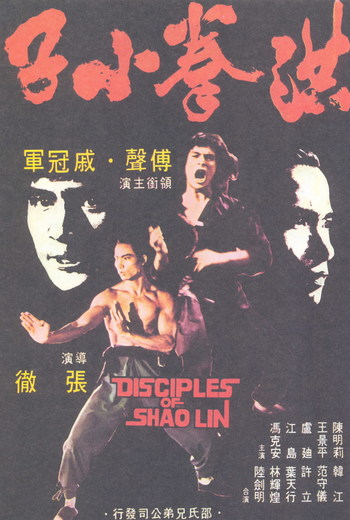 Kuan Feng-yi (Fu Sheng) is a farm boy and rebellious orphan living in the rural city outskirts, whose only known skills while growing up includes fighting, training in kung-fu, and being a naughty troublemaker. Making his way to the big city to seek his alleged long-lost uncle, Feng-yi ends up joining a textile mill after befriending a local kung-fu master, Huang Huan, who works as a mill supervisor managed to secure a job for Feng-yi in the mill as well. All is good until a rival mill owned by a ruthless Manchurian lord wants to stomp out all rival businesses.

The Shaws will remake this movie eighteen years later with The Bare-footed Kid starring Aaron Kwok and Ti Lung.

Disciples of Shaolin contains examples of: