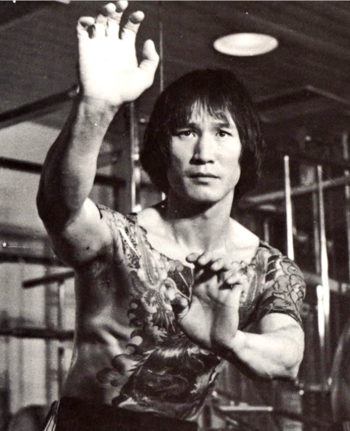 He also had four other tattoos on his back.

"If Bruce Lee is the King of Kicks, then Michael Chan is the Lord of Fists." - old saying from 1970s Hong Kong

Born in Hong Kong's rural New Territories outskirts as the son of a sailor, Chan started work as a coolie at age 12 note  reportedly, when filing up for a job application, Chan deliberately lied about his age to get a job , growing up rough toiling in harsh labour. At age 17, the teenage Chan ends up joining the 14K triads dominating Hong Kong at the time, his natural skills in brawling and fighting which he picked up from his upbringing making him a leading enforcer.

Eventually leaving the mob without a proper direction in life, his connections with the gang blacklisting him from one occupation to another, Chan didn't start acting until at age 33, under Shaw Brothers which are leading the film-making industry in Hong Kong at the time. Often typecast as gangsters, more often than not his own knowledge from his days in the triads ends up making him a professional consultant in numerous gangster-themed movies. Michael Chan made over 80 films for Shaw Brothers, and would go on to star in gangster, crime, and Heroic Bloodshed movies in the 1980s and 1990s. In short, while most of Shaw Brothers' actors are trained to be on-screen badasses, Michael Chan is a bona-fide real-life badass assigned to play on-screen badasses.

His life in the mob is documented in his 1979 documentary, The Handcuff.

Interesting fact: In 1983, a Japanese kickboxing champion visited Hong Kong, having seen numerous Shaw Brothers films, and decide to host a challenge to "test" local Hong Kong stuntmen and martial artists for a fight. The challenge is answered by Michael Chan, who proceeds to beat up said champion in a 35-second Curb-Stomp Battle.