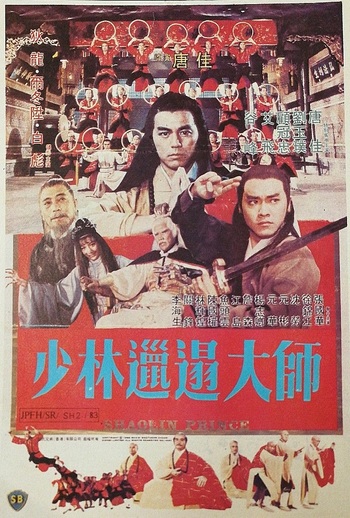 Shaolin Prince, also known as Iron Fingers of Death and Death Mask of the Ninja in it's various international release titles is a 1983 Martial Arts Movie, one of the many, many, many Shaolin-themed movies released by Shaw Brothers in the wake of the successful The 36th Chamber of Shaolin. It is, however, Darker and Edgier compared to the other Shaolin-related input of the studios at that time.

The Imperial Palace is invaded by the sinister 9th Lord, Iron Fingers (veteran Shaw villain Jason Pai Piao), who intends to usurp the throne for himself. The Emperor, facing imminent death, orders for his sons, two baby princes, to be taken far away before the impending palace massacre, and be hidden from the Emperor's enemies.

While the younger of the princes made it safely to another royal family, the older prince only made it as far as the steps of the Shaolin Temple. Adopted and raised by the temple, the baby, named Dao Xing note  道行, lit. the Path of Tao by the head abbot, grows up and lives a simple life with the Shaolin Monks. Decades later, Dao Xing (now portrayed by Ti Lung), oblivious of his true heritage, wants to travel to the big city, despite the temple monks insisting he stay put. By sheer chance, Dao Xing end up meeting Wang Zi-Tai (Derek Yee), a warrior noble, who turns out to be his brother, the other prince, who is actively seeking his long-lost sibling as well.

Soon enough, the reunited brothers will team up to take down the tyranny of Lord Iron Fingers and avenge their family.