Film / A Taste Of Cold Steel 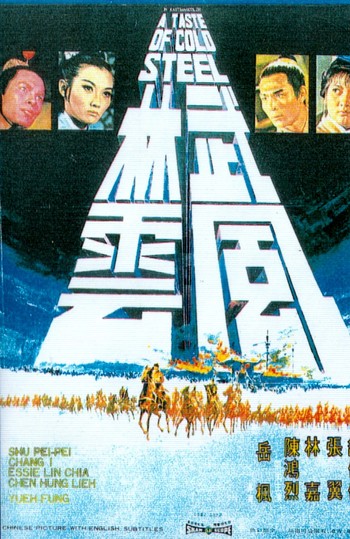 A Taste of Cold Steel is a 1970 Shaw Brothers Martial Arts Movie starring Chang Yi. It is a sequel to Rape of the Sword, released 3 years earlier, but with Chang playing a new character.

After the death of Master Gan from the previous film, Gan's daughters - Gan Sheng-nan, Gan Ya-nan and Gan Chiu-nan - are ready to take the Gan family's treasured heirloom, the powerful Purple Light Sword, to the Imperial Court for safekeeping to prevent it from falling to the wrong hands. Unfortunately, the evil Prince Lu, who wants the sword for himself intending to usurp the throne, had his minions attack the funeral, nearly succeeding in making off with the powerful weapon until he is thwarted by Hero Hsu Chiu (Chang Yi), the sisters' elder cousin and a righteous swordsman who returned from a faraway campaign to attend Master Lu's funeral.

When Prince Lu's treachery is made public, he then decides to ally himself with the Five Tigers Clan, a legion of bloodthirsty bandits, to claim the Purple Light Sword by force.

A Tropes of Cold Steel: