Film / Return to the 36th Chamber 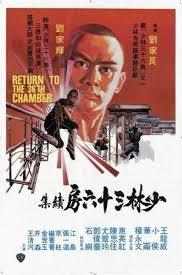 Return to the 36th Chamber is a 1980 Shaw Brothers Martial Arts Movie and a direct follow-up to The 36th Chamber of Shaolin, once again starring Gordon Liu, reuniting Liu with screenwriter Ni Kuang and producer Run Run Shaw, ever since the original Chamber.

Chou Chun-chi (Liu) is a hooligan working in a textile mill, but the workers are constantly bullied into giving up their property to a hostile Manchurian landlord, Boss Wang and his army of hired thugs. Seeking a promotion, Chou decide to teach the invaders a lesson by learning some minor degree of Shaolin Martial Arts from the local temple, and then pose as the legendary Monk San Te (from the first Chamber) to scare off the thugs. But upon being humiliated after a grueling training session in the temple, Chou instead decide to complete his training anyways, to fight for justice and put Boss Wang and his pun ks in their place.

This is merely the second Shaolin-themed martial arts film starring Gordon Liu after the original Chamber. Out of maybe a dozen.