Film / Vengeance of a Snow Girl 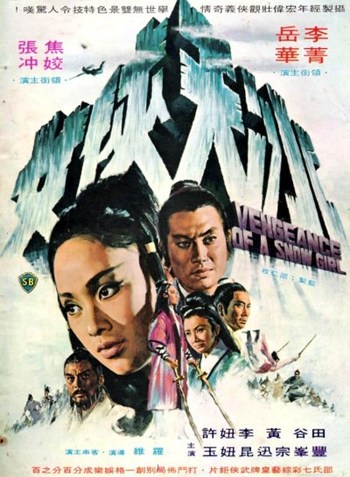 Vengeance of a Snow Girl is a 1971 wuxia film starring Yueh Hua and Li Ching as the titular heroine.

Of the many martial arts period pieces starring Yueh released in the early 70s, Vengeance of a Snow Girl is notably one of the longest and most ambitious of the bunch (three minutes shy of 2 hours) and follows a different direction in storytelling than the norm at the time; a romance story between a pair of Star-Crossed Lovers, a young swordsman and a vengeful heroine, whose fates intertwines with bitter results.

Shen Ping-Hong (Li Ching) is the titular Snowgirl, an orphan who lose her parents in a war for territorial control in the martial arts clans. Growing up alone and losing the function of her legs from the incident that claimed her family, Ping-Hong, long thought to be dead, is on a path seeking vengeance, killing her old enemies one at a time. But when she crosses path with the young warrior Kao Tien-Ying (Yueh) who fell in love with her, trouble ensues because Kao's father is one of the killers responsible for her family's massacre years ago.

Vengeance of a Snow Girl contains examples of: