Literature / The Birch and the Star 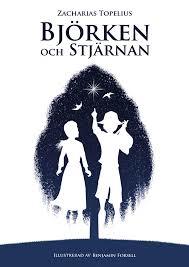 The Birch and the Star is a tale written by Finnish author Zakari Topelius in 1915. The story is set during "Isoviha", or the Greater Wrath, a time of a brutal Russian occupation of Finland in 1713-1721.

During a time of war and unrest, the story begins, many children lost their parents, and vice versa. Many were never found, but two children, a girl and a boy, being four and six at the time, were sheltered and taken in by a (presumably) Russian family and brought up there for ten years. The children, however, never forgot their homeland, and when the boy was sixteen and the girl fourteen, they pleaded for their foster parents to let them return home to their real parents. The foster family scoffs at this, because the children were too small at the time to remember exactly where in Finland they came from. "We have a sign on our home", the brother states: A birch in the farmyard, and a star shining through the birch tree. That is even more hilarious, and the foster parents will have no more of this nonsense.

But the siblings run away at night, determined to find their way home, and begin a trek for more than a year, Walking the Earth and asking everyone they meet for the Birch and the Star, and more precisely, for directions to Finland.

When they finally get to Finland, they ask again for the Birch and the Star, and often get ridiculed for it, although many take pity on them. Fortunately, two birds have guided them all the way, and confident that this is divine guidance, the sister is on the lookout for the birds, until...

They reach the exact place! The two birds settle in a birch tree on a summer evening, while the first star shines through its branches. Under the tree, the siblings recognize two small graves, and inside, an elderly couple mourns for their lost children. The siblings knock on the door and enter, and after a little confusion, a Tear Jerker meeting occurs.

Tropes occurring in this story