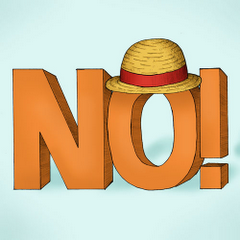 "TheStrawhatNO!: A first for everything!"
Advertisement:

is a Let's Play channel headed by ThornBrain, Mugiwara Yoshi, JigglyJacob, and formerly BigTUnit1 of the parody channel TheMidnightFrogs. The group's Let's Play style is informative, yet snarky and comedic commentary, with on emphasis on the game first and their personalities second. The team name is an admitted Word Salad Title - see the entry for the trope below.

Thorn, and later Yoshi, originally did Let's Plays with former colleague DragonFatman on his LP channel FATLPs. The two split from Fatman on April 12, 2010 and started TheStrawhatNO! on April 13. They dabbled in Retsupurae for a while, sporadically recording Let's Plays after the first month (all of which were eventually canceled). They made the jump to Something Awful in May 2011 with Bomberman Hero, bringing Travis into the mix, and this is considered the formal beginning of TSN as it's now known.

Travis bowed out of the group due to work in January 2017, and Yoshi was too busy for more than occasional commentating for the same reason, leaving Thorn as the channel's only active Let's Player for the next two years, though friend and recurring guest JigglyJacob was made a formal team member in January 2019. The channel currently has Thorn and Jacob trading off on leading LPs while Yoshi co-commentates with them. Thorn also occasionally LPs farming sims with Skippy Granola and YamiNoSenshi as "The Farm Fucks."

The channel was signed with Screenwave Media from February 2018 to January 2021 and is currently independent. Thorn has a Patreon page

to support the channel and pay for her rent, and Yoshi also has one

, and Best Of compilations of individual LPs can be found here

And then they move on to the channel itself
Jacob: "Jollyness Always Comes Overly Biased" or "James? Ass Comes Out Better"
JigglyJacob: "Jelly Is Great, Guys. Like, Yo. Jesus Also Craves Orange Berries"
Yoshi: "You Obviously Shit Hourly, Idiot" or "Yes, Optimized Sales Help Ireland"
TheStrawhatNO!: "These Hats Equal Seriously Totally Rad/Awesome. What Hats Are Terrible? None, Obviously"

"Allow me to hold you in my silver, human-killing arms."