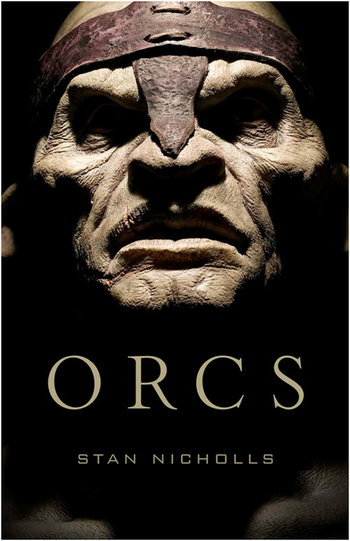 A series of fantasy novels by Stan Nicholls now entering its second trilogy. The first trilogy, called Orcs: First Blood, consisted of Bodyguard of Lightning, Legion of Thunder, and Warriors of the Tempest.

Stryke is the Captain of the Wolverines, an orc warband that was sold into the service of Queen Jennesta, a depraved half-human half-nyadd sorceress who fights in a war between the Manis (those who follow the Manifold Path with many gods) and the Unis (those who believe in only one god) in Maras Dantia, the land whose magic is slowly being "eaten" by the humans.

During one mission, where Jennesta commanded them to retrieve an ancient artifact, the warband falls into misfortune: a group of kobolds steals the artifact. The Wolverines' search for it (and, eventually, others) becomes a bloody trip through Maras Dantia, where they encounter religious fanatics, trolls, and three very determined bounty hunters.

A second trilogy, Orcs: Bad Blood, is being published. The first two books, Weapons of Magical Destruction and Army of Shadows, are out, with the third and final book on its way.