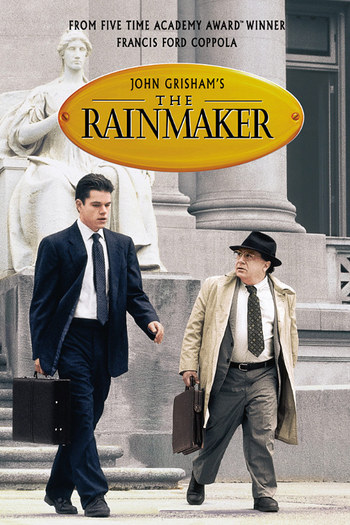 Rudy Baylor is an idealistic, up-and-coming law student in Memphis set to graduate and take the bar exam in a few months. He has a few creditors growing more impatient, but he will graduate in the top third of his class, has a job lined up at a respectable firm as soon as he graduates, and he's ready to change the world.

When the firm is bought out by a competitor, all the associates are fired and Rudy's job prospects dry up. Rudy grows more and more desperate, and soon he's evicted from his apartment, filing for bankruptcy and calling in favors to get employment and a place to sleep. Faced with the gritty reality of practicing law in a town overcrowded with attorneys, he's soon left with nothing but a single case - a bad-faith lawsuit against a health insurance company. Unfortunately, the case is defended by a team of high-powered, high-paid lawyers and tried by an unsympathetic judge.

The story follows Rudy as he deals with the transition from studying law to practicing law, his battle with the insurance company, and various subplots with his landlady and a battered wife he meets while ambulance-chasing in the hospital.

Not to be confused with the 1954 play by N. Richard Nash, its 1956 film adaptation starring Burt Lancaster and Katharine Hepburn, the 2001 album by The Flower Kings, or the superweapon from the Splatoon games.